Have you ever noticed the similarity between the words for nine and new in various other languages? 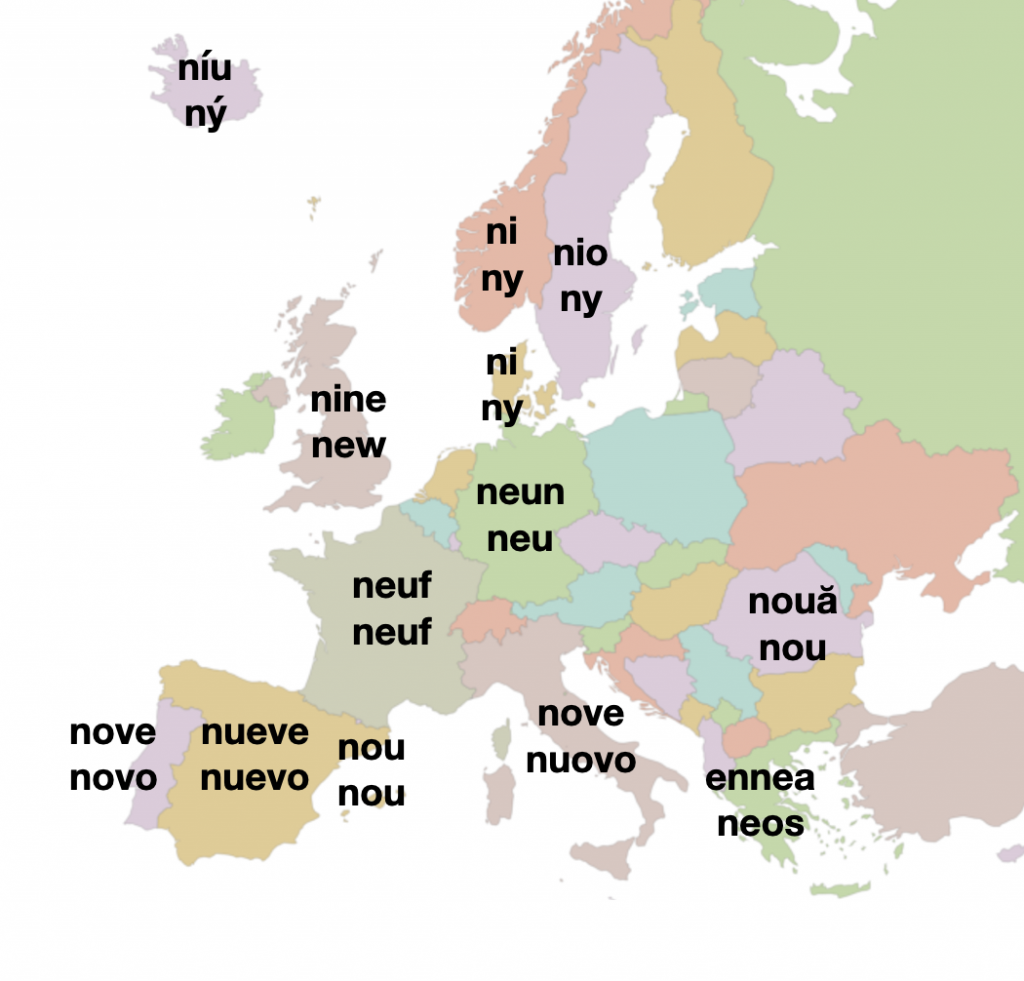 Why are they so similar? A simple answer would be to point out that many of these come novem and novus—Latin for nine and new respectively. From novus, we get English words like innovate and novice. From novem, we get November, which used to be the ninth month.

The similarity between the words for nine and new is not limited to European languages. For example, in Hindi/Urdu, the words are nau and naee respectively. These words came from the Sanskrit navam and nava. Not only are these similar to each other, they’re not a huge leap from novem and novus.

This is not a coincidence. Many languages from Europe, the Middle East, and the subcontinent are descended from a common ancestral language. We don’t have direct records of this language, but linguists can reconstruct parts of it—and they call this hypothetical language Proto Indo European. And in Proto Indo Eurpoean (PIE), it is thought that the words for nine and new were very similar to each other, which explains the similarities in many of the descendant languages.

But why were nine and new so similar in Proto Indo European?

There is a theory that appears to have been given some consideration by linguists. The PIE for eight is thought to have sounded something like okto, which itself could also mean two spans of four fingers. Instead of using all of their fingers (including their thumbs) to count to 10, perhaps early proto Indo Europeans used their fingers excluding thumbs. If so, counting to nine would require a new set of fingers—which is why—according to the theory—the word for nine ended up being similar to the word for new.

It’s a plausible theory, but many linguists don’t consider the evidence base strong enough to put this forward as the final word on the matter.

Having gone as far back as we can in pursuit of the ancestors of nine and new, let’s instead look at some of their descendants—starting with the word now. Now can trace its roots back to the PIE for new—things happening now are newly happening.

From the PIE for nine, we eventually got the word noon. But what does noon have to do with nine? Take a look at this list of ecclesiastical prayer times: Vigil, Matins, Lauds, Prime, Terce, Sext, Nones, Vespers, and Compline. Prime, Terce, Sext, and Nones mean first, third, sixth, and ninth in Latin—and they refer to hours of daylight. So Prime refers to prayers in the first hour after sunrise, and Nones refers to prayers in the ninth hour after sunrise. A notional sunrise at around 6am was assumed, meaning that Nones would be said at around 3pm. From Nones, we got the word noon, and it wasn’t till the 13th or 14th century that it began to mean 12 midday rather than 3 pm.

From the same root, we also got the word nuncheon, meaning an afternoon drink or snack. Nuncheon has fallen out of use, but the Oxford English Dictionary suggests that this word may have influenced the word luncheon. Luncheon has been around since the 1600s and it wasn’t until the early 19th century that we saw the first instances of lunch (in the sense of a midday meal) appearing as an abbreviation of luncheon.

Looking back at the map above, those with some knowledge of French might know that the French have two commonly used words for new: nouveau and neuf. These aren’t completely synonymous, however. Neuf is used for brand new objects, whereas nouveau is used for to describe anything new in the given context. For example, if you dropped your spoon in a restaurant and then asked for a new spoon, it would be clear that you were asking for a replacement rather than a brand new spoon. Therefore, you’d use nouveau—or rather nouvelle, which is the feminine form (to match the gender of the French for spoon). Note how nouvelle is quite close to our word novel, meaning original or new.

Interestingly, novel—in the sense of Robinson Crusoe—is also related to new, but we get the word via a different route. We get this novel from the Italian novella, which has come to mean a short-ish story. But before that, novella meant information of interest—or news. Who knew?